Description: A sequel to Forge's previous map, Duke 3:16. Duke 23:4 is a medium-size canyon/city map and a respectable, 12-point leap forward from its prequel.

Design: Duke 3:16 had locations that bore some resemblance to Gambini's maps. 23:4 takes this a step further, in that Forge puts a lot of effort into details and spritework to make his map look like an authentic real-life location. There's noticeable wear and tear where you'd expect, especially with one particular building that seems to have been out of use for decades and which stands in stark contrast to the more modern, but not too tidy, railway station later on in the map. Moreover, there are several surprises, structures you rarely see done this well (or done at all) in Duke3D maps, and seeing them for the first time makes you feel like a kid in a candy store. A further factor in enhancing the impression that you're visiting an actual location is the presence of many unreachable locations. Rarely you see this much effort put into locations you cannot even visit.

Gameplay: The level consists of four major locations: a decayed building, a windpark, a railway station and an outdoor urban location leading to a beach area. Pacing is good, with weak enemies in the beginning and more powerful ones as you move closer to the beach. Besides hunting for keys, there is a pretty cool barrel puzzle (although you have a low chance of fucking it up) and a bit repetitive button quest at the railway station. Item/monster ratio is perfect and the ending is satisfying, leaving you thirsty for the next part.

Conclusion: Forge's debut was a hot map in many respects but suffered from bad gameplay balance and some design flaws related to oversized objects and cramped hallways. This time Forge has put together a brilliant follow-up to his debut, one that not only fixes the flaws of the debut but also plays to Forge's apparent strengths - spritework and attention to details. The result is a western location that looks authentic and is fun to play not only because of good gameplay balance but because the map provides a few visual surprises. 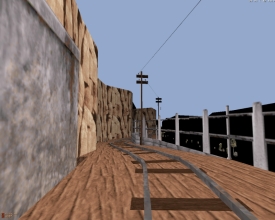 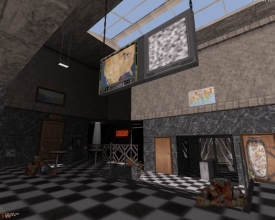