Description: A huge nonlinear map that takes place in a futuristic city. Design-wise similar to the author's previous release, Routine.

Into It: After getting briefed at the beginning of the map, you step outside into what seems to be a pretty unforgiving environment: there are no weapons at first and monsters roam everywhere. Moreover, there seem to be paths all around you: pick one and hope for the best. Maps that rely on scavenging can be pretty divisive. The first few minutes were pretty hectic (not least because I walked right past an important building that would have provided me with a weapon), but I was wearing my sneakers and was thus able to avoid death until getting my hands on tools of destruction. The game then quickly evened out even if I still could not quite imagine wasting precious bullets on destructible objects. The map is not only huge but hugely interconnected as well: in addition to a zillion street-level paths there's a sewer and a subway system that connect distant corners of the map. No matter where you go, you're bound to stumble upon something you haven't seen before. And most of the stuff you get to see is of the awesome variety. Buildings around you have a fresh futuristic look and there are billboards and neon lights to further convey a sense of tomorrow. There's quite a bit of variety too: in addition to the kind of majestic high-rise stuff you'd expect to find from a city center, there are many backstreets and slums too. The map does tend to suffer a bit from lacking indoor areas in contrast to its Conceptually Grand outdoor areas, kinda like Anarxiticalcity, but this is a minor distraction. A much more noticeable problem is the lack of shading: the ambient light level is too uniform and bright, which takes away from the map's overall atmosphere. Also, for a major futuristic city I found the map a bit too silent.
Those of you who enjoy exploration could not have asked for a better map. There are nearly 30 secrets of which I managed to find (without really looking) only 9 during an hour of gameplay. Wisely, the author has avoided tedious button-backtracking segments. Instead, there are just three cards to find and you don't need to solve any puzzles or hug walls to find them: the only requirement is to keep your eyes open. Backtracking is also effectively absent due to the interconnected layout. The map also does not rely on excessive respawns or sending hordes of enemies your way at every turn. I suffered zero combat deaths but got hit by a car once and twice I got killed by an obvious trap. However, many may experience difficulties with the weaponless segment, depending on where you end up.

Conclusion: Duke 2070 is quite a grand city map, both in terms of design and gameplay. Not only is it awe-inspiring but also poses a solid challenge. The map's interconnected layout, combined with its futuristic visuals, provides a playground built on the joy of discovery. It's not flawless, and its gameplay may not suit everyone, but it's one of the most ambitious maps I've played in a while. 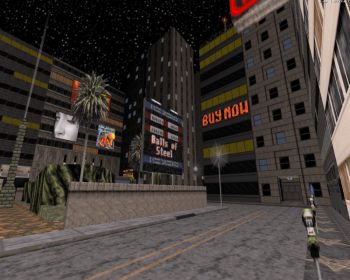 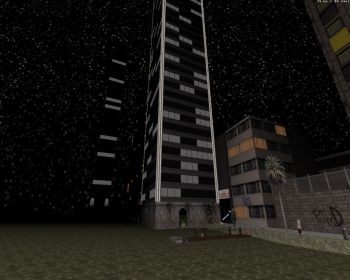