Description: Duke is back in town after having cleared a nearby dam of alien scum in Duke 6:8.

Into it: Canyons and run-down industrial locations from Forge's two previous maps have been cleared to make room for more traditional urban environments. Duke 12:12 centers around a big mall which is not too different from the million similar locations we've seen in Duke maps over the years. Like before, Forge has applied spritework masterfully; I even had to check Mapster32 to see if I were seeing good old-fashioned spritework or some latest room-over-room tricks. To lift our spirits while waging war on the alien degenerates, Forge has spread some double-entendre-ridden in-jokes around the map. The map is not quite as Conceptually Grand as its predecessors but there's still plenty of eye candy to go around (the bridge still hangs in the background and the map's immediately predecessor is referenced as well) and where the map most significantly differs from its predecessors is in its nonlinear nature as there are quite a few ways to play the map. (For example, during my first playthrough I went inside the mall first before fully exploring its surroundings.) To wrap it up, Forge has set up a nice playing field for the final boss battle that probably also wraps up this map trilogy. The map took me 30 minutes but I wouldn't be surprised if many of you managed to squeeze 40-50 minutes out of it (I found 3 out of 4 secrets).

Conclusion: Duke 12:12 is a solid experience that manages to surprise from time to time with its dirty jokes, cool visuals and replayability, and while the map doesn't improve upon its two predecessors design-wise, it doesn't disappoint either. 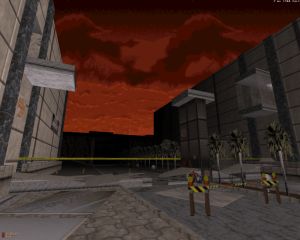 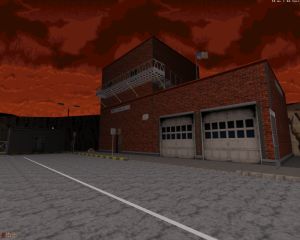