Description: A city level from the former main mapper of City Crackdown TC (which is hopefully still on its way to our hard-drives like it has been since -99).

Design: This one has numerous similarities with Duke3D's third episode - The sushi bar is very much the same (and it's not a bad thing in any way - with Duke's tools you can't create zillions of different looking sushi bars) as in E3L1. Design is good, clean and bugfree. At times it's a bit empty (street areas mostly) - not empty really but just could use some more stuff. Lightning is brilliant with some sloped shadows and other realistic effects. There are some good looking burning & crashed buildings on the outside.

Textures: Episode 3 all the way. Texturing is brilliant with good trimwork and bugfree surfaces.

Gameplay: While playing the level it felt awfully quiet. Street areas could have used more sounds as well as the indoor areas. The bar is using that annoying shopping center music instead of the real barmusic for some strange reason. There are three keys and some button puzzles. Nothing outstanding. In the end there's a cool barrel puzzle but it's a bit useless if you have TripBombs like I did.

Innovations: Check the barrel puzzle although it can be avoided.

Conclusion: Well designed, nice, silent and easy level with nothing new to offer except fun for ten minutes and some eyecandy - That's all you need. Don't forget to check Mike's previously released level (although years ago) 'Norad'. 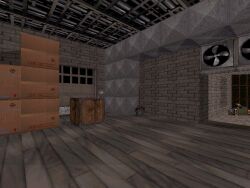 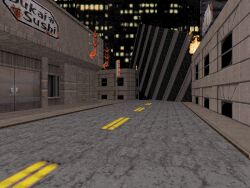