The Review: Duke is sent to prevent the aliens from using the mystic powers of an ancient temple as a means to bring in more troops. We've had a few of these temple-themed maps released in recent times, and Devil's Gate is most definitely a worthy addition to that list. The design of the ruined temple with its pillars, statues and fires has a nice realistic look to it. There are also a few other interesting sights, including a demon's head, Duke's car and a short Xen-like section. Texturing is solid but lighting slightly monotonic; implementing effective night-time lighting in the absence of artificial lights is always a tricky thing. There's also a new track that's less atmospheric than I'd have expected but it ends up being a good fit nevertheless.
The map has an intuitive layout with a recognizable center. You open up routes by stepping on "touchplated" (a "Touchplate" is a trigger in Build) sectors. While there are no viewscreens, it's usually instantly clear which wall just got lifted. The only thing I found weird was how cliff edges around the map had invisible walls to prevent the player from falling, an unusual solution in a Duke3D map (and unneeded in Devil's Gate). Monster count tends toward the higher end of the spectrum, but fighting the enemy didn't really turn into a chore until near the end where you make your way back to the start of the map; here I'd have preferred a bit more thought-out approach with respect to the use of respawns and maybe the inclusion of simple scripted sequences to better convey the sense of the aliens trying to prevent your escape. Still, combat is all-around well balanced (with the exception of some Commanders that appear in close quarters) and pretty much every monster gets to make an appearance. 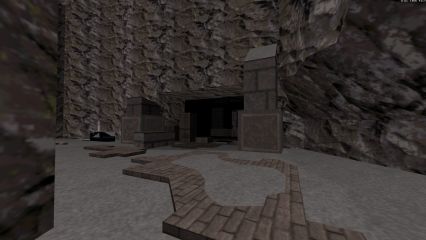 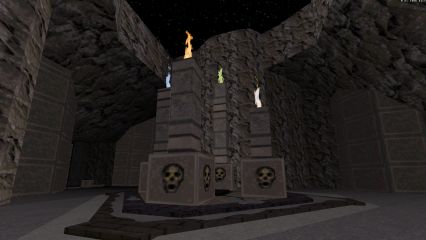