Description: Loke's previous public release is City of Despair, from two years ago. During the two years Loke really has refined his skills as Desert Storm, a big hi-tech map, is one of the best of its genre.

Into it: The map essentially consists of two sections. The first one is an outdoor/cave section that leads to a hi-tech facility, the second section. The first section treats you with some nice outdoor architecture but nothing jaw-dropping. But it servers as a nice extended intro to the actual location, the facility. The facility immediately takes you back to 1999 when Bob Averill released his first single-player map, BobSP1, a map where you couldn't wait to see what's behind the corner. In Desert Storm, no two rooms are alike and yet the map retains a consistent look throughout. It excels in every department from detailing to ZDoom-like trimwork and texturing. There's machinery, blinking lights, sounds and everything to make the environment come alive instead of being sterile and boring.

Gameplay is pretty straightforward but the sheer beauty of the facility is enough to make the experience enjoyable. However, there are several points worth noting about the gameplay. There's relatively little backtracking and searching for keys and as such a lot of the map consists of finding new locations. I was slightly lost only after finding the red key because I had not spotted any locks by that time. There are several optional areas which are notably large. Ammo could become an issue especially if you insist on shooting computer monitors with the shotgun or, more likely, end up trying to kill every Protector Drone and egg in an optional area (that rewards you with an early RPG) during the cave section, but the scarcity of ammo at this point should imply that you're not even supposed to try. You can always rely on finding health and there are five secrets that can help mitigate your item problems (I found two out of five). The map took me 26 minutes and it ends with a good, non-typical boss encounter.

Conclusion: Desert Storm is one of the best hi-tech maps out there. Its architecture is flawless and full of surprises. Its gameplay doesn't reach new heights but provides plenty of fun, although some might dislike the scarcity of ammo. 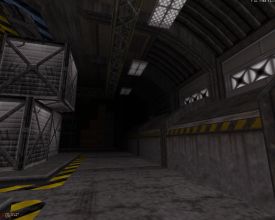 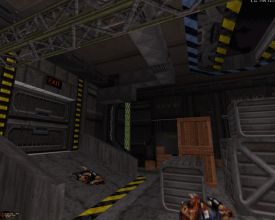