Description: One of those medium-size city maps where a street area serves as a hub.

Into it: Sanek has improved in several areas although at a relatively slow pace. Spritework is more varied than it used to be (it used to consist of vents and copypasted 3d chairs, repeated ad infinitum) and hi-tech locations look a bit better. Building exteriors look good except for the central building which has no details whatsoever. In fact, the building and several other locations refer to criticism Sanek's past maps have received with sentences such as "too lazy to make any windows" etc. The funny thing is that the time he took to decorate the central building (for example) with such self-pitying sentences could've easily been used to add some simple yet effective trimming instead (which Sanek has done with respect to all the other buildings).

Where Sanek has not improved is layout and weapon selection. Like some of his previous maps with similar themes (the city map in Countdown to Christmas for example) this map too has a layout where you've got a central area (the streets) from which you enter several locations. These locations usually consist of one or two rooms from which you're to "find" some key and then head back to the streets. The good thing is that you're given some choice over the order in which you wish to explore the map. But there was one keylock which, if activated, locked the door it was supposed to unlock (you can get around this simply by not inputting the key). As for weapons, you're given only two or three beside the pistol. With Sanek, this usually this means the shotgun & chaingun, the favored weapons, but this time the chaingun didn't seem to be available.

Conclusion: Despite criticism, Dayz is a relatively fun and well-designed map but it could do without all the self-pitying. Sanek also needs to break free from the simplistic layout design he seems to impose on his city maps and give the player more weapons. 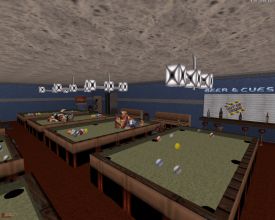 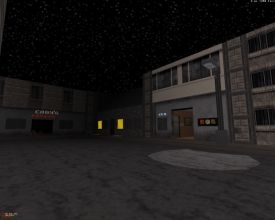