Description: Sanek's Christmas present shows some progress from his previous levels but not as much as one would hope. This pack includes six maps (of which three are short intros) and plenty of custom X-mas material including enemies from Nuclear Winter.

Into it: The intros take place in Duke's comfortable-looking house and serve as means to tell three "tales", which are the actual levels. The first two levels are pretty short. The first one consists of three areas: a large and quite undetailed outdoor area, a second outdoor area with a small lake with a freighter (this area is actually enclosed by mountains so how the ship got there in the first place is a bit of a mystery). The third area takes place inside the freighter, the biggest part of the map. There's nothing remarkable about this level. The outdoor areas look barren and the indoor Freighter locations are too cramped (usually the case with such locations but take a look at E4L9). The yellow sky doesn't sit well with the fact that it's snowing.

In the second map Duke is trying to get his hands on a Christmas tree only to find a bunch of aliens blocking his way. This is a short, three-minute map but it's relatively fun and Duke's house looks pretty good. (There's also a bug that occurs if you try to approach the tree from the wrong angle.) 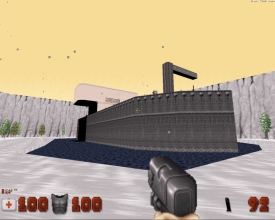 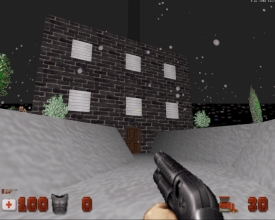 The third map is the most ambitious of the bunch, and it seems that the other two were built merely to supplement the third. It's a pretty good-looking city map although its layout is awfully simplistic, similar to that of Eye-Witness or the first map of The Chronic episode. Most of the time is spent outdoors as enterable buildings consist of only one or two quite small rooms, with maybe two exceptions. There is also a dream sequence which, while far from perfect or even remotely innovative, brings a bit of variety into a map that is, in terms of gameplay, quite monotonic. The map should take you about fifteen minutes of which about half is spent shooting liztroops with your trusted pistol. Of course, this gets old after the first minute but Sanek won't give you a better weapon until midway through the map. There's also a stupid scene near the end where you have to fight a Battlelord in a maze. Kudos for good texturing and trimming.

Conclusion: In general, there's a lot to complain about but as a Christmas-spirited release Countdown to Christmas works pretty well. X-mas material has been put to good use, including midi tracks that fit and are not too obtrusive, and the intro maps serve to provide a background to each level. However, if Sanek ever wants to break the 90-point barrier, he's still got a lot of work ahead. 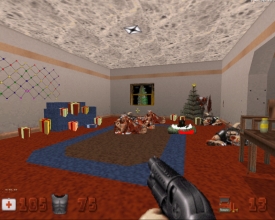 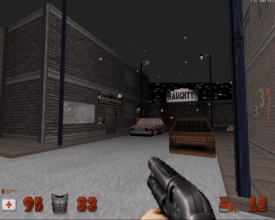