Description: The great "Community Build Project" tradition continues in space, where a futuristic city orbits the Earth. CBP 8 is as epic as they come.

Design: The theme, an orbital city, is perfect for some epic Conceptually Grand design (is there any other kind?) as is the list of names behind this project. I had a great time playing the map as it kept reminding me of several past experiences such as 2121 A.D. while being very much forward looking at the same time. The map utilizes the new TROR effect, albeit moderately, making Polymer a recommendation. This caused some slowdowns in some of the more open areas despite disabled (Polymer) lighting but other than that it was no big deal and probably worth the price. The map could be roughly divided into three parts. The first part consist of huge open areas and it's here that the map is at its best; epic and futuristic. The second part consists of mostly indoor areas, a nice break from all the huge outdoor areas, and the third part is what seems to be the city's posh district with some cool security droids and a police station. Generally speaking detailing seemed a bit uneven from time to time but overall the map looks very good, relying on interesting architecture rather than intricate details.

Gameplay: The map is of considerable size, clocking in at nearly 40 minutes and having nearly 300 aliens on normal difficulty. I got lost only once, having missed a non-obvious Touchplate sector. Item-alien ratio remained fair throughout but there were times I could have lived with fewer respawning aliens. In addition to killing stuff and looking for keys the map has plenty of refreshing ideas including an awesome ending and some good jokes, some of which you probably don't understand unless you're an "insider". As a cherry on top, Mike Norvak's Mass Effect-like custom track is a perfect fit and an integral part of the experience.

Conclusion: It's fitting that a futuristic map ended up being so innovative. That such a map is a community project and not an individual effort makes it all the more surprising: it's as if the authors had a coherent vision of how they wanted the map to turn out, even though this is rarely true when it comes to decentralized community maps. There are times when the shifts in mapping style are a bit too obvious and times when respawns seem excessive but these are minor distractions from an otherwise epic journey. 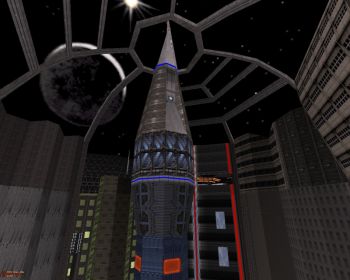 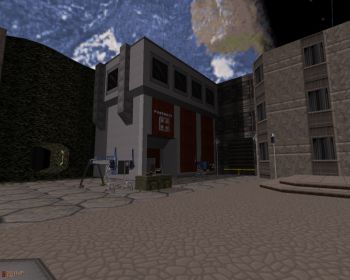