Description: MiaMax's fifth public release takes full advantage of Duke Plus. Haunted Castle is a medium size (though some may call it big which it is but only conceptually) map set in a medieval environment.

Design: As suggested above, this map relies on conceptual grandness instead of detailing every corridor in a bobesque manner. Because some areas clearly lack details, it's strongly recommended that the level is played the way it's been recommended to be played, with the High Resolution Pack. Despite this lack, there's plenty of eyecandy around, most notably the gigantic castle Duke is supposed to rid of enemies (for whatever reason: there's no readme file that'd provide a background). (There's also a cool "wave effect" near the end. Seeing it is like a reward for playing the level.) All in all, in terms of detailing, texturing and lighting, the level is a slight step backwards from Desert Base 2 but its overall look is not necessarily worse thanks to the way its theme has been utilized.

Gameplay: This is the second map (after DPCBP) to utilize the Duke Plus cannon feature. The cannon is like a controllable turret and you get to use one right at the beginning as you blow up some approaching enemies. (There's also a second cannon later but it turned out to be useless.) Oddly, the annoying hopping feature is enabled which may cause some headache. There are two problems. First is that there are several chains around the map which can be broken only with non-explosive weapons. This makes of course absolutely no sense. When you notice that a pipebomb is unable to break a chain, you tend to look for another way in instead of trying to break the chain with a pistol. The second problem is the DP transition effect which is used too often, giving the appearance that it has been used just because it is there. Despite these slight annoyances, the map is good fun. Item/monster ratio is good throughout (except for the easy boss battle) and, in general, you get to do a lot more than just running after keys and buttons.

Conclusion: Haunted Castle is not without noticeable flaws but once again MiaMax has pumped out a map with a somewhat unique style that is strong in both indoor and outdoor design, especially if played with the HRP. 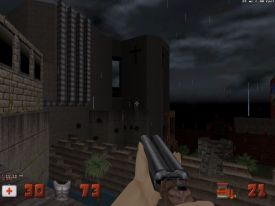 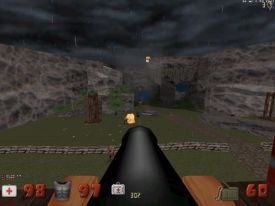