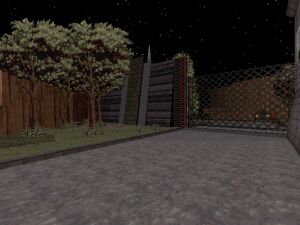 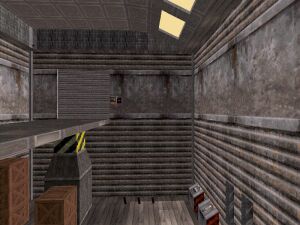 These four levels were made by Fakirbaba for 'fucked' Command & Conquer TC. Well gladly Fakir didn't allow these levels to die along with the TC so here they're now. Each level is very high-quality with top quality design & gameplay. Style is the same in each level - hi-tech complexes. I'm sure you have played FBSP001 so you know that Fakir's style is very much like Bob's bobsp style. Already from the first level you can tell that Fakir has gotten lots of inspiration from Bob's levels. However - instead of zillions of details - I can tell that eye-candy here is due to excellent texturing. So just by inserting lots of points to walls & texturing you can create very good looking maps. Even all locations are quite much the same there's still some variety. Third & fourth level has some nice outdoor locations & caves. Third level is 'doom' style level with hallways & stuff. Colored lightning looks very good in fourth level (similar to FBsp001). Shadows are where they should be but first level is a bit too bright. But of course there are some negative things too: Due to the fact that these levels are from a TC, weapon placement is a bit bad. It's good in first level but it takes a while until you find any guns from levels 2-4 (unless you're lucky enough to find one from a corpse). I had to type god mode on in fourth level so I could beat some liztroops (it's hard to do if you have only 14hp and no other weapons than your feet). So I guess this was originally planned so that when you enter second level you already have that shotgun from first level. But you can play these levels only one by one unless you hack user.con file a bit. Puzzles were mostly good (just key/button hunting) but levels 3 (to find the red key) & 4 (to deactivate that forcefield) both held a button which was too difficult to find at first. Excluding these two buttons & problem with guns, gameplay is very enjoyable. There are lots of enemies to keep you awake. You'll be firing a lot with a shotgun because that & chaingun are only weapons that are given (apart from pistol & pipebombs).

9.14.05: Uploaded the full & original zip archive of Command & Conquer TC maps by Fakir. It's the same as the one available above but with Dukematch maps and unfinished levels. Download!