Description: underTaker's series of Duke maps has reached its fourth part, and this time it's something a bit different. Duke's bus has taken him to a remote town somewhere in the middle of a desert. The red dusk sky and abundance of aliens are indications that something sinister is going on so Duke decides to take a look. Brainwash facility is a big, open-ended city map.

Into It: This little town actually manages to avoid most city map clichťs as your visits to grocery stores & such are quickly done with, allowing you to spend more time going through tunnels, vents and even rooftops that connect the many locations the map's got to offer. Most of the action takes place in and around a nuthouse that houses several interesting locations and cutscenes. The map's strength is how it almost instantly opens up everywhere, revealing new locations in a constant barrage. As always, such layout carries a price as it adds mindless wandering to the in-game clock. Another problem is that the layout apparently confused the author as well since you can now skip a good portion of the map, something I noticed on my second playthrough as I went for a different path right from the start. One of the map's appeals is just this, that it constantly surprises you with respect to where you might end up. Design-wise the map is just as good as everything looks good against that red dusk backdrop. The street area looks terrific with detailed building exteriors and utility poles everywhere you look. Spritework is abundant and helps the map attain an authentic 3d look without the use of the new TROR effect. Item-monster ratio is challenging but fair, not allowing you to miss too many shots, although this too is somewhat dependent on the paths you happen to take and the secrets you come across.

Conclusion: If underTaker's previous map forced you to spend too much time in confined, generic hi-tech spaces, Brainwash Facility is all over the place with its diverse selection of locations and dusk-enhanced eyecandy. The map has a strong original touch to it, which is something that's not easy to attain these days, and while the layout has its drawbacks, for the most part it's what keeps the going interesting. 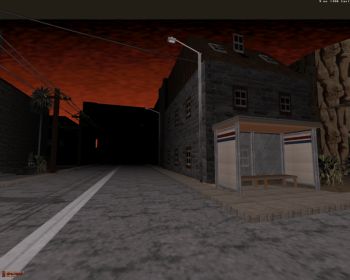 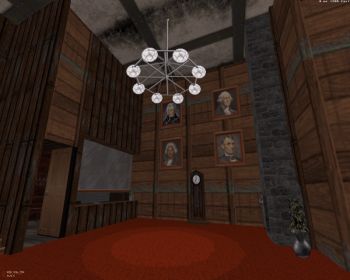