12.05.2021 Note: The author has released an expanded version of the map. The expanded areas include a rather large secret area that makes very good use of industrial machinery and colored lighting; it's a bit tough to find, but at least you'll get a hint it's there. Another noteworthy addition is a shorter section for some more supplies (even though I actually ended up having more ammo issues this time around); the attraction here is a nice view of the station's exteriors.

The Review: The moment the map launched I was instantly reminded of Powerstation 64 (never reviewed here despite its beauty, as back in the day I just couldn't understand why Stranger was wasting his talent on Dukematch maps). Boxes and Doors, a space map from a previously unknown author, gets plenty of mileage out of just a few Episode 4 textures; despite never designed for space maps, they feel right at home here. There are a few new textures too, but they are rather subtle, blending in perfectly with stock assets. This is one of those "neat & tidy" type of maps with a perfect DNA where not even a single strand feels out of place or half-assed; every texture is seamlessly aligned, every sprite perfectly positioned (I'm not sure I like seeing glass on windows in space though). And while Boxes and Doors is quite generic (hence the name I suppose?), consisting of nothing but similarly colored rooms and corridors with mostly boxes and computer panels in them, the map still has plenty of visual surprises up its sleeve. One thing I particularly liked were its use of sector-based fans; a lesser mapper would have simply used sprites in their place. Also, you won't find any sprite-based radar dishes here.. Gameplay too is quite enjoyable; while combat is standard stuff all the way, the pacing felt just right and gave me plenty of time to enjoy my surroundings. And there's a bit of challenge here too, as the map isn't too lavish with items, and searching every nook and cranny is well worth it. Only the ending felt slightly abrupt, but then again it's all good if it's a subtle hint of a sequel to come. 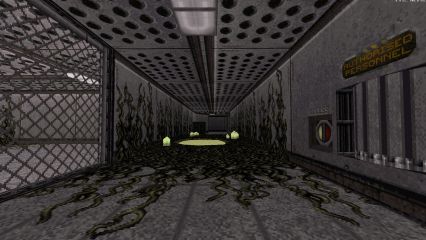 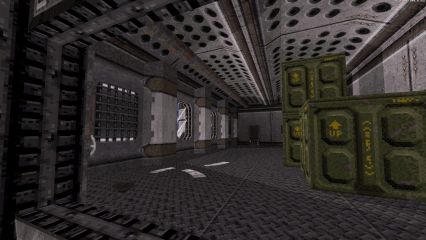