Description: MRCK returned from a hiatus a few months back with Happy hangover. "Bottles to the Ground" is a nonlinear city map, and it's pure MRCK.

Gameplay: For some odd reason, Duke must find several buttons scattered around some city that's located right next to a swamp area. From the swamp you'll find a crate with three red keys, all of which must be used. In other words, you're forced to return to this area several times. This and the button thing mean that you're pretty much free to travel the map in any order you want. I got lost a few times but you're provided with some useful hints in the beginning. There are plenty of easter eggs (although you'd have to be "one of us" to understand most of them) and some cool scripted sequences. Even NOFX makes an appearance! I played the map twice and both times I was a bit short on ammo even though I played the map in a bit different order.

Design: Design is good and MRCK seems to have shed off the crampedness that has bothered his maps in the past. In Happy Hangover MRCK placed buildings outside the gameplay area and made them pitch black to create an immersion of a city that expands outside the confided streets you travel. (This obviously works only in night time maps.) He's repeated the effect in Bottles and it looks good although sometimes hard to notice. The swamp area fits in nicely with the grim look of the city area.

Conclusion: An interesting city map with plenty of things to look for. The map has a moody look and nonlinear gameplay which you may or may not like and my guess is that many of you end up having some serious ammo issues. As for me, I found the map well paced. 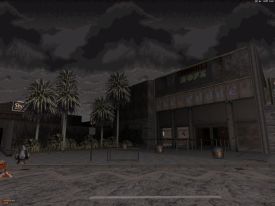 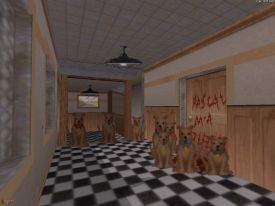