Description: Another generic hi-tech base from CarThief, who entered the glorious mapping scene a bit over a year ago with Delivery to Hidden Base, a flawed hottie. DukePlus (see the download link above) required.

Design: The map looks and feels like its predecessor. Like Delivery, From Base to Base is awfully cramped, generic and heavily indoor. Strictly in terms of details the map looks good but it gets pretty dull when every hallway looks exactly the same, not to mention that doors tend to get lost in the background. Lighting is also unimpressive: no matter where you go, there are hardly any light level changes. The base is also awfully silent: despite the huge amount of computers and machinery around you, there is only one location where you get to hear some ambient sounds. Several things do stand out, in a positive way that is. There are some cool 3D computers and the outdoor areas felt refreshing after spending lots of time indoors.

Gameplay: Compared to Delivery, item/monster ratio is much better now with plenty of health and ammo around. Also, there's far less backtracking. In fact, the level is very linear and it has been divided into several segments, separated by DukePlus transition effects (which seemed useless). Combat has its ups and downs. There are several cool set ups where you're locked in a room and have to face several foes before advancing. However, some of these are downright frustrating mostly due to the heavy use of enemies with "star projectile" attacks. One direct hit instantly kills you no matter how much health you have and while there's a lot of cover at your disposal, the fact that these projectiles bounce off walls renders cover pretty useless. It'd be better if the player had more space to move around. You come across friendly aliens from time to time and get to see a few alien-alien combats, particularly one nice outdoor combat scene near the end.

Conclusion: This is by no means a bad map at all, and several things have improved since Delivery to Hidden Base, but the biggest problems that plagued Delivery are still there. First, while the level of details is way above average, it's hard to get past the fact that nearly every room looks the same in terms of detailing, texturing and lighting. Second, combine the confined spaces of nearly every room with the amount of enemies shooting star projectiles and you end up getting killed a lot even when you're crouching behind cover. From Base to Base is a slight improvement but still very flawed. 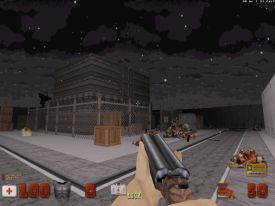 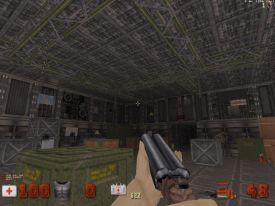