Description: Even after working on Oblivion for years, Zaxtor just couldn't take a break from mapping: it's in his veins. HXC98_Base is a pretty typical Oblivion map: massive in size, beautiful but with disappointing gameplay. Oblivion TC required.

Into it: The base is on an island and like all base maps in Oblivion, this one looks pretty stunning, especially when you get a chance to view the entire base from outside. Zaxtor gives his maps a unique look: you never come across any apparent sloppiness (such as misaligned textures) and no room is left empty (except when it serves a purpose). There are many room over rooms and complex spritework everywhere.

But like so many maps in Oblivion, this one too falls short of its potential due to tedious gameplay. This time there isn't anything difficult or unfair: the base is quite straightforward in terms of gameplay since all you have to do is run after keys and buttons. The problem is that you end up running through the same set of hallways a billion times and each time you have to kill a zillion respawns. A couple of times I simply jumped past them to avoid fighting but this is of no use because at some point you have to fight them anyway to prevent them from occupying every inch of the map (the corridors are rather narrow).

And the level's layout isn't very innovative either. Usually you travel to a location somewhere in the map, press a switch there which opens a door far away from your current location. As you backtrack a long way you kill a bunch of respawns. These spawns do serve an important purpose: they keep you on the right treack. But there is no excuse for the sheer amount of them or the poor layout which forces you to go back and forth. There are locked doors literally everywhere, and each one of them has to be opened sooner or later. The thing is that the door you just opened usually leads to a new area that's just one or two new rooms, a poor reward for spending minutes killing monsters. This is the process that continues ad infinitum the moment you set your foot inside the base and something like 90% of your time is spent within the same set of hallways. (For comparison, check Scar-City of which something like 95% consists of discovering new areas.)

There's plenty of ammo and health available, even too much of the former (as was the case in Oblivion), so having enough bullets for your enemies won't be a problem. The level is huge: it took me close to 70 minutes. There's a cool "get out before the base explodes" part at the end.

Conclusion: HXC98 Base is more tolerable in terms of gameplay than most maps in the fourth episode of Oblivion but it's still a long way from the sweet, simple gameplay style of West Alien Train. Forcing the player to spend most of his time within the same set of rooms without providing a proper reward isn't a good way to design entertaining levels. 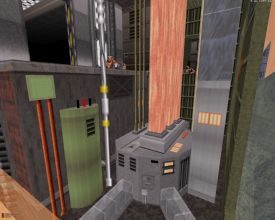 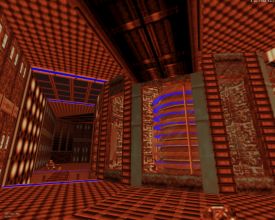