The Review: Mister Sinister appeared out of nowhere with his "Bad Weekend" episode (after which he released Canyon, a usermap). The episode provides what all of us want: mostly city-themed levels (nine of them, including two secret ones) with tons of action. To compensate for the inreased amount of enemies, your weapons have been given a boost.

After escaping your apartment in the first level, you hit the rooftops. Visually the outdoor areas are the best part of the episode, setting your expectations somewhat high at an early point. The level, however, takes a tumble in quality once you enter its vent hell, a seemingly never-ending network of ventilation shafts with confusing layout.

The third level is a small section of an apartment building. The level is a bit cramped and there's too much of button pushing and fighting going on without enough interesting architecture to keep you interested. The level should take you less than ten minutes which is five minutes more than what the layout calls for. Respawns extend the duration unnecessarily. 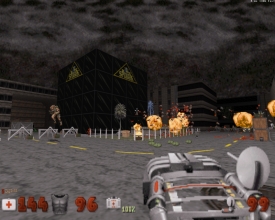 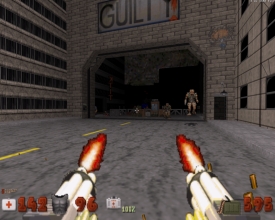 The fourth level finally takes you to city streets but only after another cramped indoor section. This map exhibits many of the problems that so severely brought down the score of Mister Sinister's latest map, Canyon. There are way too many enemies and while you're given enough firepower to bring them down, you're constrained by your cramped surroundings. Also, while other enemies are weaker thanks to improved bullet damage, Protector Drones are now in fact much stronger; it takes six shotgun shots to put them down. The ending to this level is also a bit of a challenge that you can survive either by trying to be tactical (which takes a lot of time) or relying on intensive saving & loading. My guess is that most players will either get stuck here or cheat their way out.

If the fourth level was too cramped considering the size of your opposition, the fifth provides plenty of open spaces. Almost everything happens outdoors where you'll meet nearly 300 bad guys. The map is easily the best part of the mod. You have enough space to move and tons of weapons. The Expander is particularly effective thanks to its accuracy, rate of fire and power. Non-conventional weapons such as the Expander and the Devastator dominate. Also, there's no backtracking which leaves little room to artificially extend the map's duration by forcing you to clean up areas you went through minutes ago.

The last two levels (including the boss level) are of the bizarre variety, clearly influenced by Zykov Eddy's black&white map from Infestation in Time (severely underrated on this site). Gameplay is pretty unimaginative, a matter of finding a few buttons and then moving on to the next area. The map is also too horizontal and the rooms too similar while Eddy's black&white map was more varied. There are also two secret levels, of which "Dante's Office" is like a repeat of the fourth level's hectic ending.

Conclusion: As far as presentation goes, Bad Weekend is top-notch. It looks and sounds good and it's got style. However, it takes a bit too long to get out of cramped areas and into the open. Respawns should be used carefully and not to make you replay the same areas over and over again. The mod is at its best when you're on the streets with plenty of space, facing tons of enemies but with an enhanced arsenal. It's a shame such moments are fleeting. 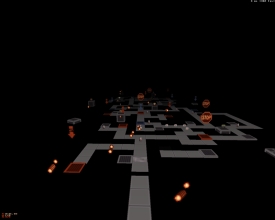