Description: Supertanker's second "post-retirement" map is a medium-size hi-tech base.

Into it: Supertanker built a bunch of okay-quality usermaps a few years back. The maps were close to the encyclopedia definition of generic. As it happens, Supertanker has taken a considerable leap forward in terms of level design but he still seems to be stuck with genericism. Even the name "Area 27" pretty much implies that it's up to the player to define the purpose of the location, which is essentially a collection of hi-tech rooms.

While generic, the base looks pretty amazing with detailed corridors, strong lighting (which is one area where Supertanker has learned a few new tricks) and beautiful outdoor segments. The outdoor segments serve as short links between different parts of the base but you're actually confined to hi-tech hallways while tempted to explore the open-sky locations around you. Even deep underground you're from time to time reminded of the rocky surroundings you never get to visit, for better or worse. There are plenty of vents in the map but they're actually well designed with curved edges and good trimwork.

As for gameplay, you have to kill a bunch of troopers before getting your hands on anything more powerful than the pistol. Item/monster ratio remains fairly constant throughout the map but I'd have wished for a bit more variety in the weapons department; the level's length and monster count would have justified including some non-conventional weapons too. Most of the time you're confined to narrow (but not MRCK-narrow) corridors but in a fair move you're not set up against Commanders or Drones, monsters that can render cramped levels unplayable. In the best segment of the map tension is built for a few minutes until you're surprised by some loose beasts.

Conclusion: A fun and well-designed level that suffers from a lack of variety and not knowing what its purpose is. 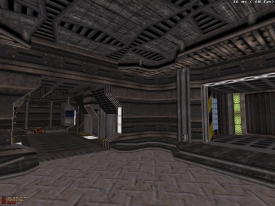 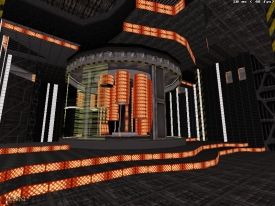