Description: Located (thematically) between Happy Hangover and Bottles to the Ground, Anorak City is a result of a merger of two unfinished city maps that had slim chances of surviving on their own.

Design: Anorak has some of the finest urban architecture yet. MRCK's skills have become more sophisticated in that the messines of texturing and sprite usage that was heavily present in some of his older maps is nearly absent in Anorak and as such MRCK is effectively burning the bridge between him and his initial sources of inspiration. As with Anorak's two predecessors, gone too is the crampedness that at one point was MRCK's trademark. Duke's incredibly versatile texture set just keeps surprising in the hands of ambitious mappers. But what really sets the mood in this map are its backgrounds, black cityscapes in the distance, this time with bridges and barely noticeable lights.

Gameplay: Gameplay was implemented almost as an afterthought but it works well, a commendable feat considering the distinct origins of the map's two parts. As with Bottles to the Ground, you're given a fair amount of choice over the gameplay order. There are several buttons & keys to be found with the aid of several viewscreens. Pacing is good with bigger fights taking place on the streets rather than in cramped indoor locations. Item/monster ratio is good no matter how you start playing the level (I went through the second part first during my first playthrough). The map comes with a calm music track that fits the mood perfectly.

Conclusion: While the level plays pretty much like its immediate predecessors, its design is a bit better, more refined while relying on the same set of tricks (realistic architecture, easter eggs, ambitious backgrounds) that made MRCK's previous levels work. 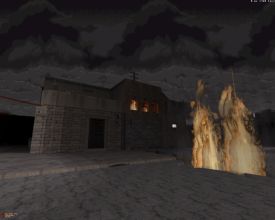 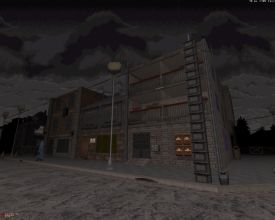