The Review: Continuing from where Nitroglycerin left off, Duke's been abducted by the aliens and finds himself aboard their ship, headed for the alien homeworld. This provides an excuse to explore some alien landscapes, which seems like a rare opportunity these days. Granted, it's difficult to work with this limited texture set; every alien map ends up looking more or less the same. But High Treason has done a pretty good job at it, especially in the map's second half where you're treated to some otherwordly sights that make you wonder what lies beyond the horizon. The map also makes good use of sound effects, which are plentiful and used in unusual ways, and the soundtrack is a fitting medley of classic Lunar Apocalypse tracks. As for gameplay, the first half of the map is quite linear with some nifty setpieces along the way. The second half revolves around Duke fetching fuel for an escape vessel; it's a neat idea but a few seconds into it you know exactly how the rest of the map is going to play out, allowing tedium to set in slowly but surely. A few issues have been inherited from the previous map(s), such as cramped corridors and having the player fight hitscan enemies with no cover. As a final note, the author recommends Polymer without dynamic lights, but there are some jarring visibility-related issues with more recent version of EDuke32 (and it's Polymer so expect bad performance even without lights). Polymost is just fine aside from the perennial issue with skies.

Conclusion: One of the best "alien homeworld" themed maps out there, especially the first three quarters with its setpieces and fascinating alien landscapes. Those familiar with the Build editor might get extra enjoyment out of High Treason's apparent fondness for "clever" effects. Just too bad the second half starts to wear you out to the point that you're just happy to leave the place. But hey, maybe that's what the author intended. 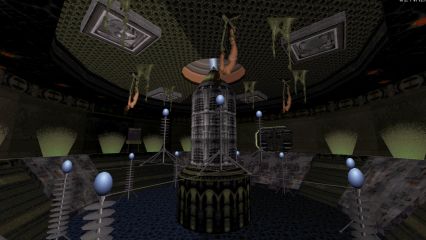 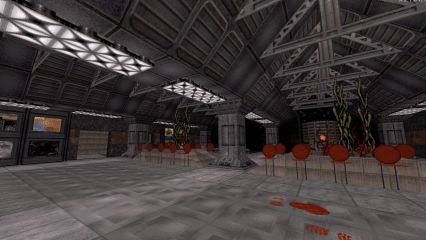