Description: This map marks the beginning of a new era in Duke3D usermapping, being the first one to debut on Steam (although the Megaton Edition is not optimal for the map). ACB Studios is a medium-size map that takes place in a TV studio.

Into It: It's hard to believe the author has not released maps in the past. ACB Studios is impressively designed with consistent, thoroughly pleasant texturing all around, relying on a mix of clean brownish colors against a white sky. Curved surfaces, an underused element in Duke3D maps, are often employed to give the studio building a bit more organic look. The map's dull but adequate lighting strangely fits with the color scheme. There is a rather clear, hub-based layout with several vents and side doors opening up interconnections around the studio. Adjacent to the hub there are four studios that you must explore. The pattern gets perhaps slightly repetitive but ultimately the map is not too long for its own good. Combat mostly takes place indoors, some of it in rather cramped areas, but it's balanced with a good selection of monsters: there are no rocket-launching Commanders or exploding Sentries to watch out for. The ending was rather abrupt: all those Devastator rounds were a bit misleading. Well, maybe a sequel is in the works...

Conclusion: Ancient Coffee Bean makes a highly respectable mapping debut with ACB Studios. While short on surprises, the map's texturing and use of curved surfaces combined with balanced gameplay make it a must-see, must-play experience. 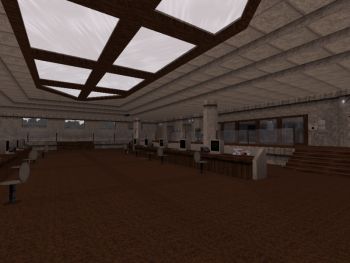 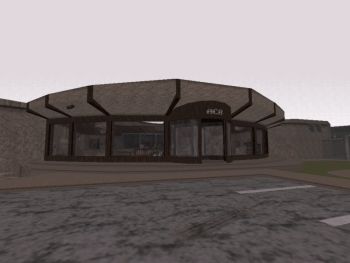