THE REALMS OF GRUNE TC BY WOLF Now this is one of those Total Conversions which were released before time existed. "The Realms Of Grune" has only five levels (the less the better - always) but there's a lot of new stuff from a whole new set of textures to new weapon models.

Levels have one big problem - puzzles. The idea is to push a button and then search for a door that might have been opened. I'm sure you're all familiar with this behavior but the problem is the amount of buttons & doors and the logic. A switch can be hidden on the back of a box or behind a curtain (now that's where I'd place a switch). There are no hints given of what door opens once you have pushed a button. So it got a bit frustrating - in fact it got very frustrating so yes I cheated. The thing got very bad in the second level - "save your game BEFORE putting a keycard into a slot" shouldn't be a policy when you build levels.

Levels mix medieval theme to a bit of hi-tech. Design is pretty good with lots of sprites & good shadows. These medieval/hi-tech sprites are way over-used. Walls are filled with them and they're all flat. Shadows are simply amazing - they have a logic behind them and they're often present in various forms - beautiful. The second level is based on a neat time-travel idea but is spoiled by these puzzles. There's also quite a lot of biblical stuff from altars to small churches. New textures (some from Shadow Warrior) are well used and look good.

Grune has some new weapon models but not really any new weapons. Freezer now kills instead of turning the enemy into a blue stick (there are dozens of TCs out there with a similar Freezer game.con replacement). New models look good but they also could have used new sound effects. New models & old sounds doesn't fit. There are two new enemies (and a fish) - the first one is some cool dude who shoots nasty sparks and the another one is the big bad boss - The Fiend Head from Quake. There are also some new sound effects.

Conclusion: There's enough new stuff there and it's mostly good and well used but the levels could use less flat sprites on the walls and the puzzles could be a lot better - now there are just too many gameplay killers & sudden stops. 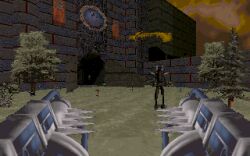 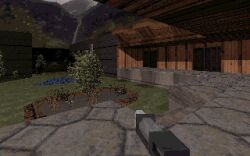